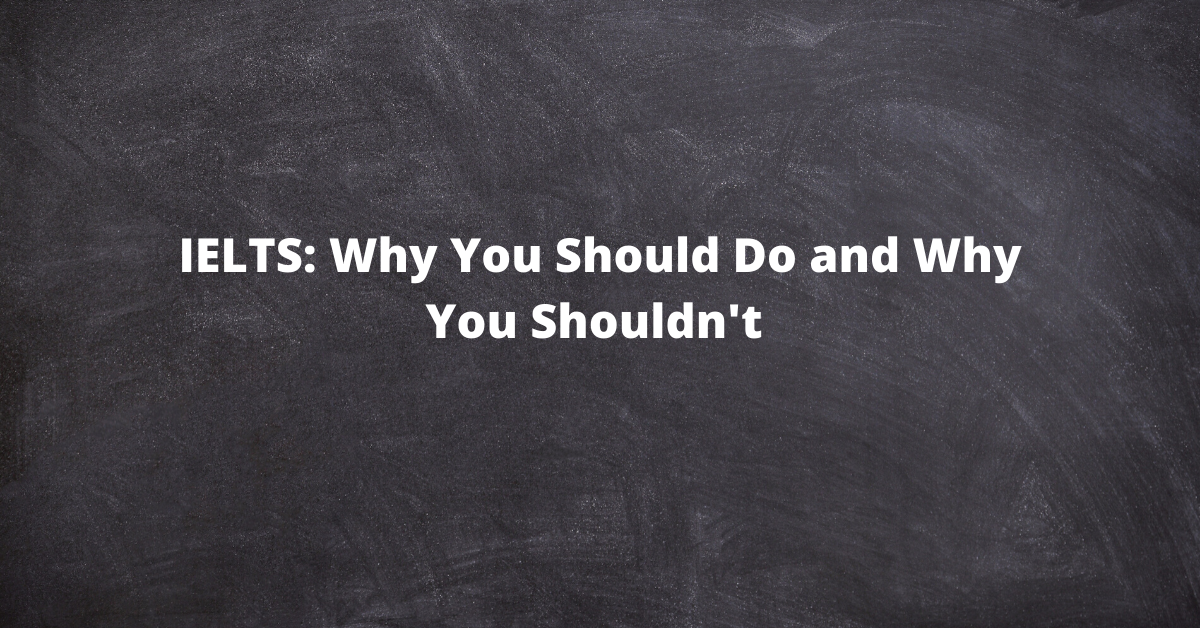 IELTS is the hottest trend among Indians, especially Punjab youth, who migrate to overseas for their bright future. Every year, hundreds of thousands of Punjabi youngsters attempt the IELTS exam, especially to secure study visa of Canada – as it’s the topmost priority of Punjab residents due to being immigrant friendly status and better lifestyle.

But IELTS is not for everyone. The passing ratio in IELTS is very less, being it an English exam. Many students try attempting it before giving it a second thought. After wasting months or years, they give up and find other means to immigrate, either through marriages or through family sponsorship.

Let’s discuss who should do IELTS followed by who shouldn’t:

You should do IELTS if

Like all other exams, IELTS asks your time and determination. It’s commonly seen that most of the students lose their interest in IELTS after a while of their course commencement. Most complaint about IELTS modules nature and find them boring to do after a few weeks. That’s understandable. We, humans, get bored easily and it’s how we are designed by God. IELTS is boring if you are doing the same thing over and over again without allowing the creativity in your daily routine and without working on your strategies.

Instead of parroting the exam, do it systematically. A good teacher will never consider the old used up technique (doing modules regularly until you are not fed up) to mint money. He/she works with the student and prepares the strategies for the desired results.

Most students, especially with poor English background consider they will score well in the exam if they join an academy. It’s a good step and a teacher is a must to understand the insights of this exam. But… if you are not willing to put extra efforts and not going to do self-study at home and evaluate your performance, then IELTS becomes a nightmare.

To find the right teacher and IELTS institute is the first step toward finding success in the IELTS exam.

Many students believe doing IELTS modules daily will get them the right IELTS band score. They couldn’t be more wrong than this. Doing IELTS modules daily only prepare you for the exam criteria; it doesn’t prepare you for THE exam. Only, when you are good in English, then this technique is the best way to beef up your confidence and to clothe yourself in IELTS related mindset to have good IELTS exam attempt.

I have seen and have worked with a lot of students, who didn’t know their weaknesses. Before coming to Voxcel, they hopped from one place to another in hope to score the required band. They never bothered to think what’s stopping them to produce the desire IELTS result for their Canada Study Visa or their study Visa abroad dream.

The best way to bring improvement in the performance is to track down the weaknesses and hammer those areas that need the sire attention. This way, a student comes to know what works in IELTS and always give up the old orthodox mindset to clear the exam.

I have seen a lot of students’ mistake in Simple Present Tense in their Writing and Speaking module. This error is found throughout their two modules and the score they get is acceptable. I create techniques around those areas, according to the student’s capability and mindset, and get those weaknesses covered for a better result.

Now, this is the thing, where most students and their parents lose. Majority of the students doing IELTS have no patience and they are in constant pressure by their peers and by those old aged people in their neighborhood, who consider IELTS a childish exam and believe it a few months course. Easier said than done for them.

IELTS doesn’t come with the time period tag. It’s all about your performance. Most students, especially from rural areas or students with poor English background don’t want to accept the fact. Even many students from CBSE or ICSE boards struggle and clear IELTS in few attempts.

Then there are those students who hardly study for it and, still, score great band score. Got the pattern in all of this? It’s about the English understanding, as IELTS is all about your English communication exam and is designed to test your English proficiency on 4 parameters: Listening, Reading, Writing, and Speaking.

I have met loads of students who start losing their nerves after few months, despite coming so far and they fill their exam, only to hit on the face with the reality (low band score). If you are not performing well in the academy in Cambridge modules, chances are, you will not do fine in the exam, too. The exam pattern will be same as of the books, so don’t rush. You won’t do well magically.

Some students understand and listen to the teacher, and do wonder. Some just give deaf ears and fall blatantly. It’s a sad situation which is on-going.

If you are weak in English and you are unable to perform well in the academy or are improving, then don’t rush. Canada, Australia or any of your dream country is not going anywhere. They are not going to close the doors. Instead, your focus should be on having good scores and having great command on English language, so you can do outrageously well in an English speaking country and can use English as the ladder to the success.

Now you shouldn’t do IELTS, if …. Reverse the above-mentioned points and there’s your answer.

Finding any problem in IELTS and not clearing it even after working very hard? Voxcel Group is considered by many as best IELTS institution in Punjab. Currently, we are offering classroom classes of IELTS in Ludhiana and having plans to expand them. We also offer online IELTS classes to help students who are overseas.